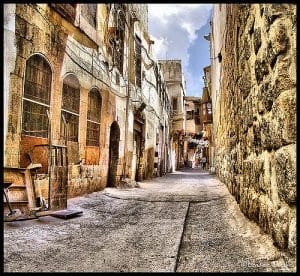 After settling into our new life, new neighborhood and house, my parents began searching for good schools for me and for my siblings. The good thing about living in the old section of the city was the ability to find a variety of schools within walking distance, especially for the elementary schools. This gave my parents them one less thing to worry about while they were trying to adjust to our new adventure.

Attending church was and still is a big part of my people’s way of life. Church for most Christians was more than a place to worship; it was almost the only way to be connected socially and to be part of the community. Growing up in a Muslim country caused the minorities to hold on tightly to their beliefs. The Christian population used to be numbered at ten percent under Saddam Hussein and the Baath Party regime. Nowadays the Christian population has shrunk to less than one percent.

People who were not involved in politics used to have a comfortable life and felt a sense of security. The life of individuals would only be threatened when they decided to rebel against the government. People would be arrested immediately whenever they expressed their feelings of dissatisfaction with the government or if they dared to share their political opinion about things they did not like. The Baath party had a stronghold under Saddam’s regime. The former president was expert at training the most intelligent surveillance network possible to keep tight controls on everyone.

Living in a war torn nation for many years did not prevent us from pursuing life and trying our best to enjoy our time and not worry about what tomorrow might bring. We literally lived out what the Bible teaches in Matthew 6:34 “therefore do not worry about tomorrow, for tomorrow will worry about itself. Each day has enough trouble of its own”. I should admit that we did not choose to live by faith at that time as a personal decision. We did not have any knowledge of the Bible. What we lived or experienced was a traditional version of Christianity, although we were committed to attending church on a weekly basis. However, that in and of itself did not qualify us to be committed Christians with a personal relationship with Jesus.

I am not sharing this to judge or minimize anyone’s relationship with God, because I truly believe that we acted upon what we knew at the time. I participated in the life of the church, by singing in the choir since the age of nine. I loved the fact that I was deeply involved in special religious occasions held at the church that I attended. However, my soul felt empty and I used to have several questions about the Bible, but did not know whom to ask.

I felt that God was a distant God, the one who judged the entire universe from afar. I had no understanding that He is a personal God who has a great plan for my life. He showed himself to me several times. He protected me from the devil, but I was too stubborn to listen to His voice. I had no room in my life for anyone but myself. I only cared about what I wanted and desired. After being a committed Christian for many years now, I can recall how many times He tried to reach out to me, but I turned my back on Him. I appeased my conscience by going to church and committed to performing the religious rituals, which gave me the image of godliness, but did not change me internally.

The story of Jonah in the Bible continually inspires me to believe that God has great love and compassion for the Middle East, Iraq and Mosul, which is located in ancient Nineveh. Jonah 1:1 states “now the word of the LORD came unto Jonah the son of Amittai, saying, “Arise, go to Nineveh, that great city, and cry against it; for their wickedness is come up before me.” Two things in these verses do show God’s heart toward the people of Nineveh; first, that He cares about people, and desired to give them a chance to know Him. He also describes Nineveh as a great city, not just one time but actually three times.