The political situation in northern Iraq was not stable. Tension between the Iraqi government and the Kurds was increasing. Kurds wanted their own independence apart from Iraq. They showed this by being rebellious against the government, which only created a chaotic environment and made it hard for my family to have an appropriate and safe life. Even though my dad was earning a good living, still he couldn’t risk the unpredictability of the political situation any more. He needed to think big. Nothing seemed bigger than moving to Baghdad, the capital, where he could give his family a better life. Bagdad in the late seventies was flourishing in every aspect. There were a lot of opportunities to work in better schools and that is what happened for my father later on.

With every baby girl came additional burdens. The burdens were a combination of different feelings of fear, anxiety, shame and loneliness. My parents are the most kind and loving people you can ever imagine. That is not just how all of my siblings and myself view them, but also everyone who has met them and knows them personally, including their sons and daughter in law. The culture, however, and the environment they grew up in was very harsh. Culture and traditional expectations have been rooted deeply for hundreds of years and it is so hard to change or even modify them. Honoring and keeping the cultural traditions that we inherited without questioning could easily turn out to be the god we worship. 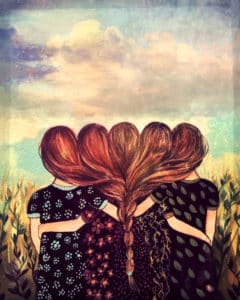 In my stories, I will be sharing several occasions where this kind of negative mentality would fit in an individual’s way of thinking and feeling. Solicitude of having a boy manifested itself in both a positive and negative manner. When we were children, we did not really grasp what it meant to have a brother or not. What we felt was we would be seriously unfit and vulnerable as sisters with no brother. Showing favoritism toward boys was the norm. We used to hear people around us reminding us of our unfit state of not having a brother who would care for our needs.

Studies and research have shown that children from an early age can sense their parent’s anxiety and fear. Our attachment style toward my parents, to others, and the world, has been influenced by that. Some people would manifest their attachment style by being angry, others by crying all the time. My attachment style, however, was by showing affection to my parents, especially to my dad.