My parents wanted to have the biggest party ever to celebrate my brother’s birth. Why not? Is not that what they were praying and hoping for through many years? They were no longer considered to be the abnormal family. The son they had now had changed their status to a “normal family”. After all, he is the one who will carry on the family name. As this little child would grow, he would become more familiar, not just with his privileges, but also his responsibilities as a first-born son. Let us not get distracted and worried about the future of this little boy. Let us first celebrate his birth which brought hundreds of people to the party that evening. In reality, even my parents told me the number of guests attending did not exceed a hundred people, but I did not want to change the number in my recollection of this event, because, for my understanding as a child, hundreds was any number larger than ten. At least it felt this way to me at that time.

All of my cousins, relatives and friends were invited to join us to celebrate my brother’s birth. There were many people attending that day. AS children, Most of them we did not know. In fact, our guests knew that my dad, teacher Luke, had a bunch of girls, but finally God had granted him a boy who would carry on his father’s name. At the celebration, some people were dancing. Children were playing, and men were playing games and having fun. The women were cooking and preparing all kinds of delicious foods. My four sisters and I were allowed to eat and do whatever we liked since we had not had this kind of gathering for many years. Everyone was super happy. All the men and women were dancing the traditional Chaldean dance, with loud music playing.

Months and years went by while this little boy grew. We needed to take care of him and protect him, so when he grew up he would provide for us what we could not provide for ourselves. Not because we were incapable, but simply because we were girls. That in itself should communicate a lot about our culture and the way we were raised. We loved this boy so much, we wanted to be around him continually. We would dress him up in our dresses and we sometimes put makeup on him. My mother would laugh at the way we were entertaining and interacting with my brother. However, she would rebuke us for not behaving. It was her fear of raising a spoiled child. She wanted him to be a type of child who would be prepared for the task, which was assigned to him as an older son. 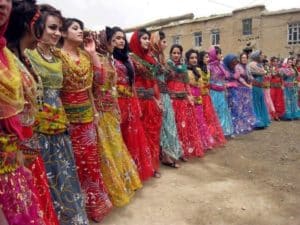 Culturally speaking, when someone has a son, people refer to the parents as the father or the mother of their oldest son. Therefore, my dad was called Abu Ammar and my mother was called Oum Ammar, which refer to the father and the mother of Ammar. Ammar is my brother’s name. For almost ten years prior to my brother’s birth, my parents were called by the name of my oldest sister. That kind of privilege was taken from my oldest sister without even having a discussion with her about it. I remember hearing some neighbors talking to my parents about their decision to automatically change their name. They were saying that is not fair. For our neighbors it did not make any sense to be called by my brother’s name, just because he is a boy. Honoring the tradition was more important than evaluating the ramifications of these traditions than to see which could have negative consequences.

My parents were super thrilled about having a son. However, they got anxious too. They felt they needed to have another son to help with their family responsibility. Here they were again putting themselves under the same kind of stress they had experienced for many years, while they were waiting for their first baby boy to be born.

The complete number of children my parents had was nine living children not counting the two babies who died at an early age and the one baby my mom miscarried. What are the genders of the three children who would be joining this family and thus make my parents feel satisfied with what God has blessed them with? That is what we will find out through this journey.